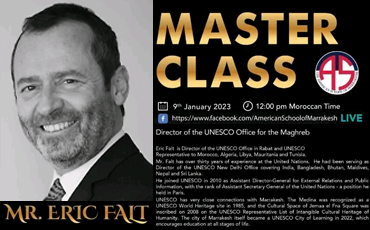 Biographical note of Mr. Eric Falt, Director of the UNESCO Office for the Maghreb.

As of 1 October 2022, Eric Falt (France) is Director (D-2) of the UNESCO Office in Rabat and UNESCO Representative to Morocco, Algeria, Libya, Mauritania and Tunisia.

Mr. Falt has over thirty years of experience at the United Nations. Since May 2018, he had been serving as Director of the UNESCO New Delhi Office covering India, Bangladesh, Bhutan, Maldives, Nepal and  Sri Lanka.

He joined UNESCO in 2010 as Assistant Director-General for External Relations and Public Information, with the rank of Assistant Secretary General of the United Nations – a position he held in Paris for eight  years.

From 2007 to 2010, he was Director of the Outreach Division in the Department of Public Information  at the United Nations Headquarters in New York.

Mr. Falt previously served as Director of Communications and Public Information for the United  Nations Environment Programme (UNEP), based at its headquarters in Nairobi, Kenya (2002 – 2007).

Mr. Falt began his career in 1989 as Press attaché for the French Consulate General in Chicago and  then at the Permanent Representation of France to the United Nations in New York.

Welcome to the American School of Marrakesh!